Leading food and beverage small footprint store operator, Fruitas Holdings Inc., listed on the Philippine Stock Exchange under the symbol FRUIT, delivered Php168 million of shareholder value in second quarter of 2022. This comprised Php23 million of quarterly net income – its best reported net income since listing – and Php145 million in incremental equity reserves from the listing of Balai ni Fruitas (BALAI) shares. The incremental equity reserves represent excess value over cost of investments as FRUIT was able to price the BALAI shares at a significant premium to its investment during the IPO.

For 1H2022, FRUIT posted a gross margin at 61.5%, which is better than the 60.6% gross margin in 1H2021 despite the increasing raw material prices. The Group has implemented tactical price increases and continued to expand its supplier base and improved raw material sourcing to mitigate raw material price increases. For 1H2022, FRUIT registered EBITDA of Php122 million. 1H2022 EBITDA margin reached 15.5%, better than the 5.9% margin recorded in 1H2021, as the Group continued to capitalize on economies of scale and improved store performance. Net margin for 1H2022 was at 3.7%, compared to negative 1.7% in 1H2021. Net margin continued to expand in 2Q2022 at 5.0% versus 1.8% in 1Q2022.

FRUIT’s consolidated cash and cash equivalents has also increased to Php610 million from Php318 million primarily driven by the proceeds from the BALAI IPO, completed on June 30, 2022. FRUIT had increased its liquidity from a 2.4x current ratio at the end of 2021 to 3.0x as of June 30, 2022, thus providing the Group more flexibility to execute its strategic initiatives which include its store network expansion and potential acquisitions. Debt-to-equity ratio dropped from 34.3% at the end of 2021 to 28.7% as of June 30, 2022.

In terms of subsidiaries, BALAI registered the most significant growth in net income from Php2 million in 2Q2021 to Php9 million 2Q2022. FRUIT’s beverage and food subsidiaries, Fruitasgroup and Negril Trading, respectively, likewise delivered stellar quarters. Fruitas group benefited from the seasonal bump in demand for its juices and shakes during the summer season, while Negril Trading benefited from reopening of cinemas, with its anchor product de Original Jamaican Pattie, being a go-to snack for cinema lovers.

Soykingdom Inc., another FRUIT subsidiary, is set to complete the acquisition of the Ling Nam business within August of 2022. The acquisition shall include various assets of Ling Nam including its trademark and technical know-how, among others. The acquisition will be FRUIT’s entry into the casual dining segment and will complement Soy & Bean to solidify its expansion in Asian food concepts.

FRUIT added about 20 stores from March to July 2022, boosting its number of stores to above 720. The recent IPO of BALAI allows the Group to further expand its network more aggressively. The Balai Pandesal commissary is expected to start operations within 3Q2022.

“The 2022 first half performance is a testament of the Group’s ability to deliver significant value to its shareholders. Despite economic headwinds, we delivered increasing margins and profits. We continue to bring focus to each of our subsidiaries in line with our vision of each Filipino household consuming a Fruitas product everyday. Our performance for July 2022 also continued to exceed our expectations and we hope to deliver a bumper year to our shareholders,” said Mr. Lester Yu, FRUIT President and Chief Executive Officer. 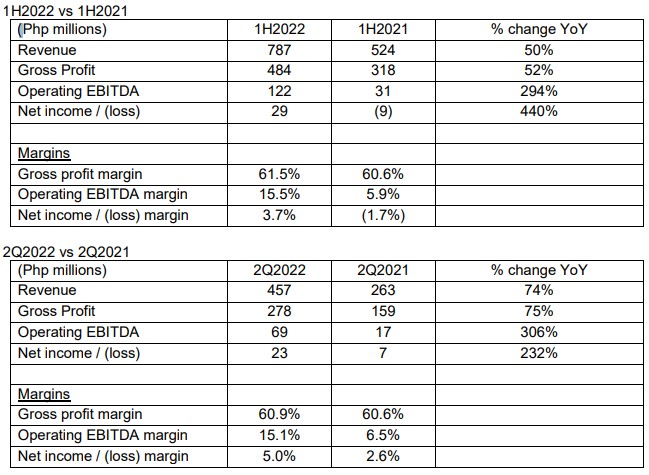 The foregoing disclosure contains forward-looking statements that are based on certain assumptions of Management and are subject to risks and opportunities or unforeseen events.